When pigs fly is a game that came out a yet another Game Jam at Forsbergs Skola.

The theme for the Game Jam was "Save the world" and "Co-operation" and our twist on that can be explored ingame.

In our design process for this game we wanted to explore if we could challenge the players to make active choices about power ups. Each power up gives you more, but also comes with the price of higher risk.

The game is on itch.io and you can check out the video above.

In "When pigs fly", you, the lone mogul pig from Wall Street, compete with other self-made pigs. In your quest to get to the promised lands of  tax-haven tropical islands, you have to stay away from the evil IRS, who will stop at nothing when it comes to taking your hard earned money. Not even if it means chasing you down in jet fighters.

So be brave, greedy and swine-like! Pick up coins on the way, grow big and fat, and use your weight to force the tiny pigs out of the way. But be smart, the richer and bigger you become, the more likely it is that the IRS will get you. It's a cruel world out there, it's the survival of the fattest.

Because as you all know, you will see a game where you try to save the world of finance from the “evil” IRS, when pigs fly! 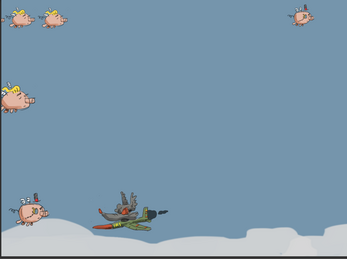